The Food4MaccDirect Hub at 14 Gilchrist Avenue is now open for our deliveries and customer collections, and on Thursday 17th may we served our first customer here.
We would like to take this opportunity to thank all those that have helped by either giving their time or donating items for us to recycle. Everything has been utilised from paints, stationery, cups and tiles to tables, chairs, a cooker, a freezer and a radio! 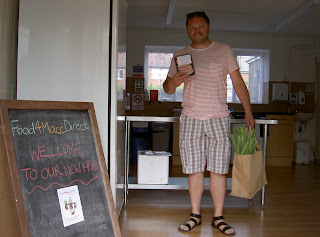 Inevitably there were those who only showed up for a drink.

We'd also like to thank the following local companies that we have used who have all been very helpful and efficient:-

We look forward to seeing you at The Hub or one of our branch pick ups at Amuse or Bollington. Please keep checking the website for new produce and upcoming events, the next being the Danebridge Fisheries Trout BBQ/picnic on Sun 01 July, (order places by 18th Jun).

Thanks,
Sara Wreford
Hub Manager
Posted by Food4Macc Admin at 19:32 No comments:

The Macclesfield Express this week included an article about a new deli opening on Chestergate focussing on Local Produce. See more at http://www.facebook.com/TheMonocleDeli
or call 01625 612456.

Visit the Corner Plot website
The Corner Plot was the vision of Robert and Anna Carey who set up the shop to sell locally grown produce and craft items. Run as a Not for Profit organisation, The Corner Plot operates as a social enterprise supporting the local community.

Seasonal fresh fruit and vegetables are available in the shop, many of these are sourced from The Paddock Gardens, a small horticultural project for people with learning disabilities. You can find out more about them at www.thepaddockgardens.co.uk

Opened on 17th May 2012 after many hours of scrubbing, sanding and painting the shop is set out to attract shoppers from in and around Macclesfield.

Posted by Food4Macc Admin at 07:04 No comments: 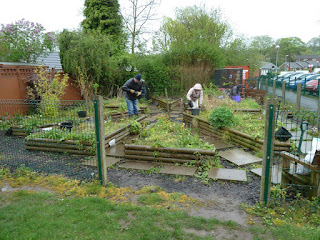 Food4Macc enjoyed a successful day at Hurdsfield County Primary School where the mission was to do a one day ‘makeover’ of the eight existing raised beds.
Despite the inclement weather, Food4Macc volunteer turnout was excellent (Emma, Neil, Stuart, Sara, Phil C, Phil P and Bill), ably assisted by Andrew and Andy from Hurdsfield – not to mention Celia, the Head, who did sterling work keeping the troops well looked after with refreshments.
The profusion of deeply rooted weeds proved to be very physically challenging. Food4Macc donated seedlings and bushes to help ‘kick-start’ a new food-growing initiative at the school.
We hope to keep in touch to see how they progress. 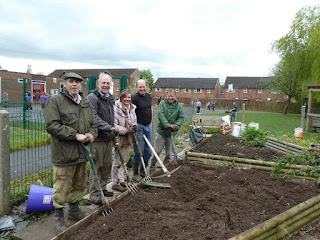 Posted by Food4Macc Admin at 18:04 No comments:

One of our recent Food4Macc manure collection trips evoked this poem:-

Quirky Turkey : A Labour Of Love

The turkey glided proudly by, fanning out its tail,
A stately Spanish galleon sedately in full sail.
Plumage mottled black and white, it ushered by its mate,
Relishing its status as one of those who dominate,
Even though it sailed upon a “sea” of horse manure
And we were there to see the status quo did not endure.

“I’ll have it in a verse”, I thought, “Before this day shall end.”
“I’ll have it on my plate”, said Bill, “I trust I don’t offend.”
But Bill’s was only banter. His blue eyes brightly twinkled.
The turkey’s glare was fierce, his wattle pink and wrinkled.
One finger of a rubber glove, it dangled from its beak,
And wildly danced each time the turkey griped in Gobble Speak.

As bag by bag we took away, the turkey’s realm receded
And several times our efforts he purposely impeded.
He fought a losing battle, his Armada at Cadiz,
And we were quite determined that we would do the “biz”:
Like a hydra-headed Moses, who was parting the Red Sea,
We went about our Augean task with something close to glee.

We dressed like Harold Steptoe (whose horse was “Hercules”)
And carted off this bounty for potatoes, beets and peas.
The yard was cleared. The heap was gone. We were tired but relaxed.
Our job was done. We’d finished here, so lyrical I waxed
Whilst Bill, content with biscuits, had the turkey left to thank,
But, deflated by this pillage, its heart and tail both sank.